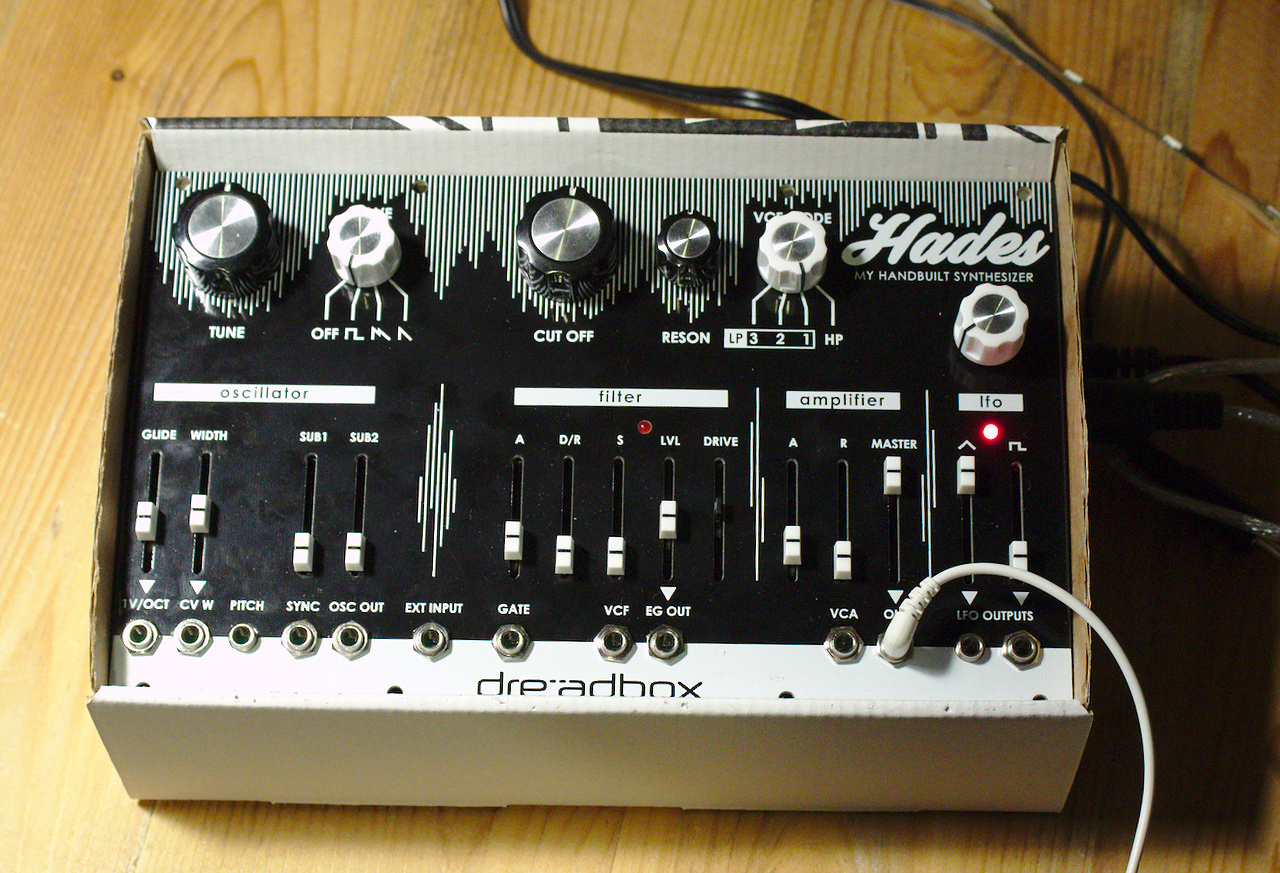 This is a finished Dreadbox Hades DIY, a monophonic Eurorack compatible synthesizer from Greece, which was briefly available in kit form. (It’s no longer available for purchase)

It was substantially more involved as a build than I expected - it didn’t ship with resistors so I used some from my stash. There’s nothing especially tricky about the build, there’s just a lot of small parts and a lot of individual solder joints. Here’s the populated board: 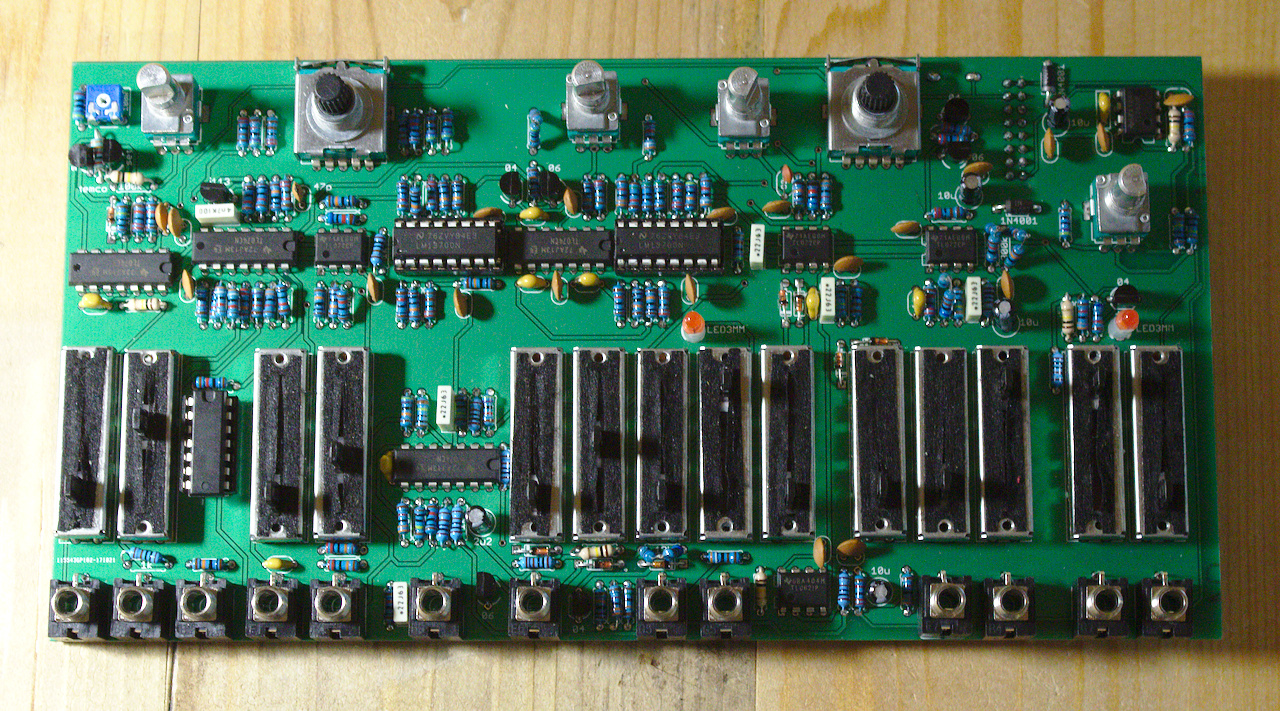 The resistors and the capacitors took the most time – stuffing a board with ICs and big moving parts is a doddle in comparison.

So, The End right? I built someone elses synth kit, big deal!

That picture was really just the start of the most fun part of building the kit: putting it together and finding out it doesn’t quite work.

I put the case on, even tightening the nuts which hold the potentiometers and jacks in place, and found that when I hooked everything up to MIDI – nothing happened. It didn’t react to MIDI notes at all. This was made a little more frustrating because it was a new, cheap, MIDI-USB cable, so it could be the cable. And I’m not very familiar with MIDI routing in OSX or Linux, so it could just be user error. Luckily it was neither.

The Dreadbox people make the schematic for this kit available online, which was a priceless debugging tool. I located the pins on the 24 pin connector that I needed to trace and got ready to test it on the oscilloscope. 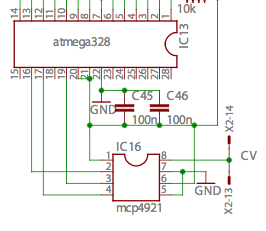 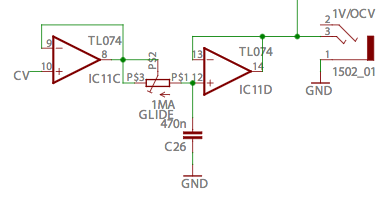 I decided to dig in, took the board out of the case and… the control voltage worked. I put it back in the case, and it didn’t. And then it sometimes worked if I pressed on the board, but sometimes it didn’t. There was clearly an intermittent connection somewhere. Either something was shorting out which shouldn’t, or a circuit was being opened where it shouldn’t.

The schematic let me trace the CV to the C and D parts of the TL074 quad op-amp on the top left of the board. The signal was fine at pin 10 – running a MIDI sequence in a loop in seq24 showed edges of transitions – but by the time it was output to the 1V/Octave 3.5mm jack on the board it was gone. Outside of a defective op-amp, the only really obvious component that could be at fault is the glide 1M&ohm; slider. 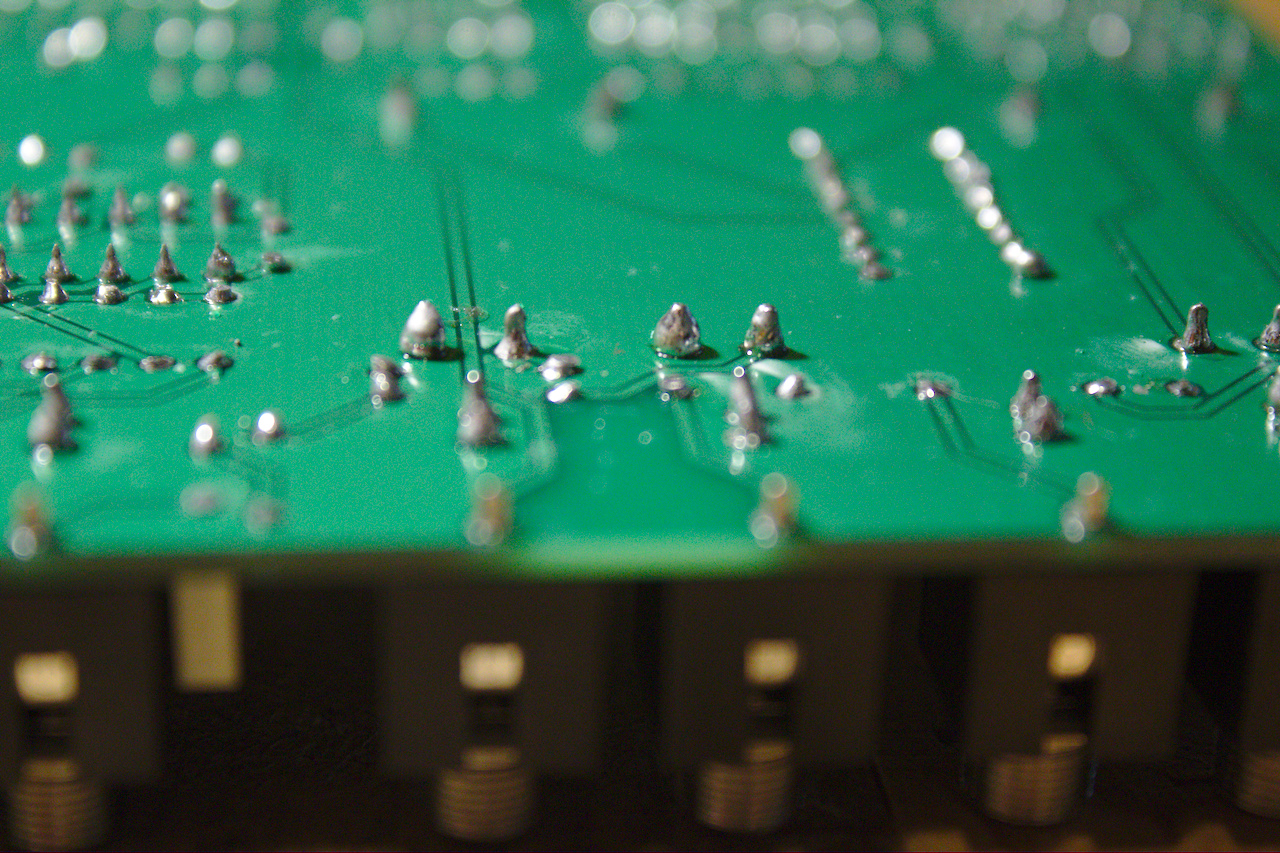 I didn’t grab a photo of it, but that slider (and others!) had dry joints. It made contact, but once the case was put on the pressure on the sliders broke that contact. I’m not used to soldering big parts that need this much heat – I just went over all those joints and melted them again, adding a little more solder for good luck, and the CV issue was fixed.

(These are still pretty bad solder joints, I should have melted and solder-suckered them and then started over. But this works!)

Once I was able to hear the tone changing reliably, the other issue was that neither of the two parts of the synth which should be triggered by the gate signal were working. There’s a gate output on 3.5mm jack, and checking it with the oscilloscope just showed a constant DC signal. I traced back to the pin on the 24pin connector – still dead, and back to the pin on the microcontroller – working just fine! There’s only one part between the connector and the microcontroller, a 1N1007 diode. I believe that it’s there to stop an external gate source feeding back into the microcontroller. Gate voltages don’t need to be TTL, so an external gate could kill the chip.

As I wasn’t using an external gate, I bridged the diode with alligator clips (which made the gate work) and then replaced the diode with a signal diode from my spares box. It’s not an 1N1007 but that diode was massively over-specified, being able to cope with 1000V and 1A of current.

This fixed the the voltage controlled amplifier (VCA), but the filter (VCF) wasn’t working properly at all.

This one is pretty embarassing.

I traced the bias on pin 9 of the TL074 op-amp used near the gate input to the filter – the bias voltage was fine, but pin 10 showed a barely perceptible square wave on top of a wall of DC. It was like the positive input of the op-amp was really biased badly, or the positive feedback was all wrong.

The construction manual for the Hades says “be careful not to mix up 1K&ohm; and 1M&ohm; resistors” and I thought, “how would you even do that?” and yet… 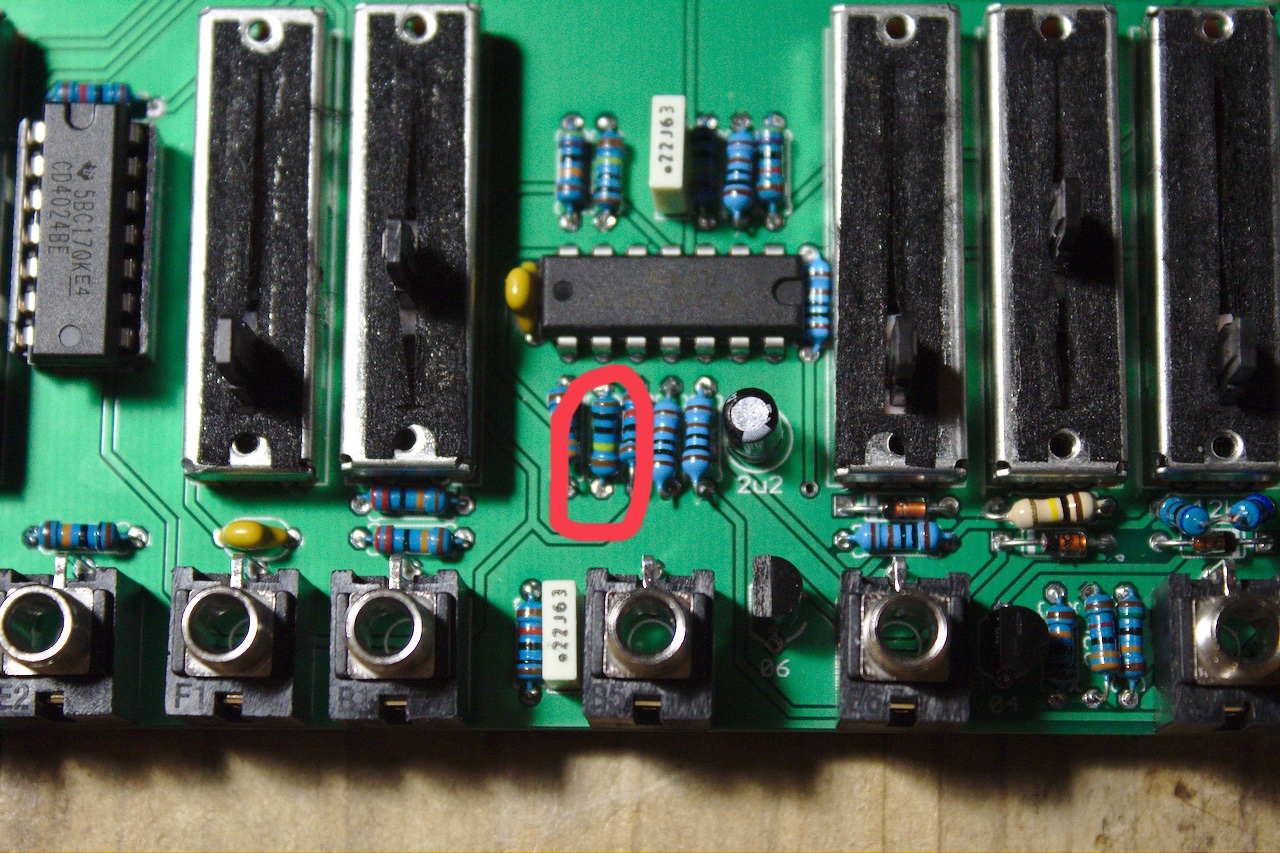 Once I replaced this resistor with an actual 1M&ohm; one (and not a 1K&ohm;) – the filter sprang into action. All fixed! 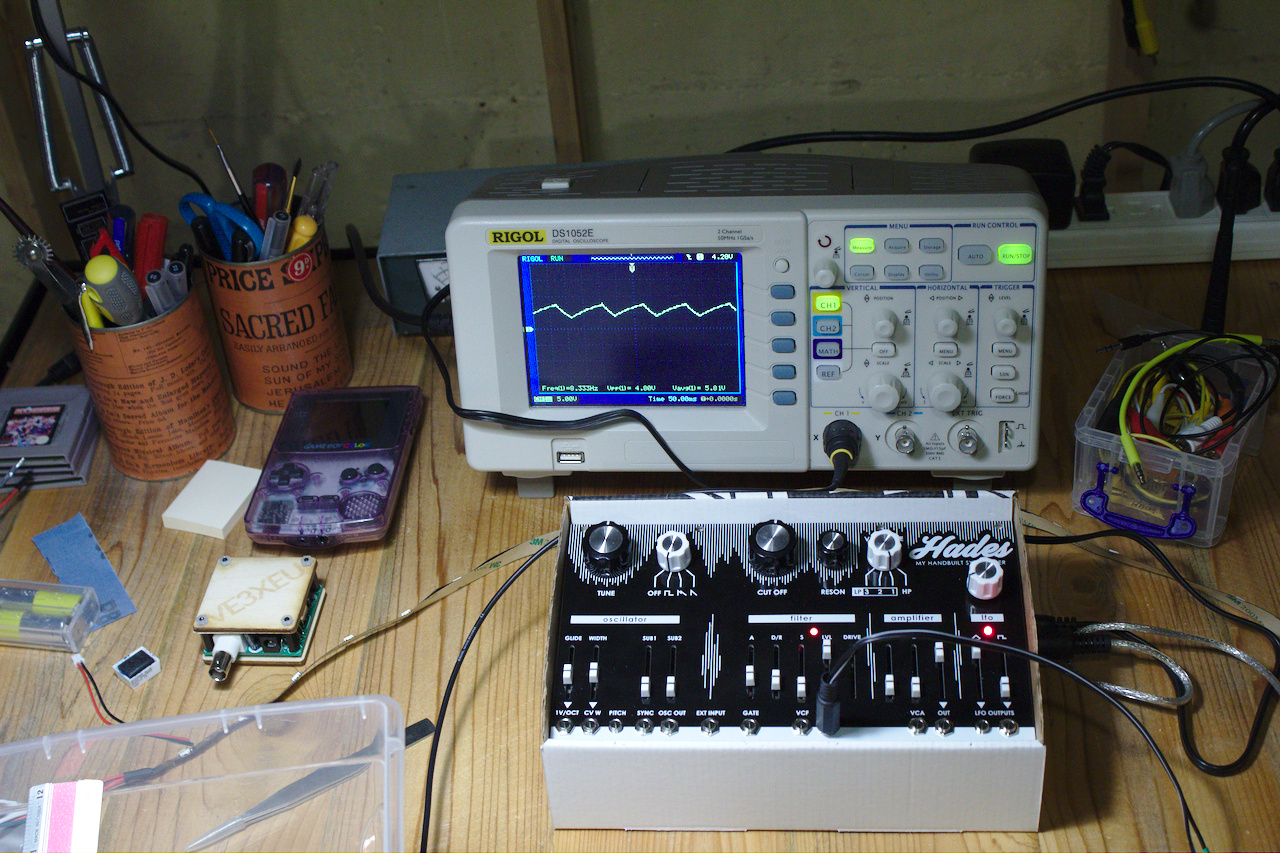 This is a pleasant ramp being output by the envelope generator (which is an A D/R S type).

Miscellaneous Bad Things I Did

I didn’t have all the right resistors in stock, so I had to either add resistors in series (R1 + R2) or in parallel (1/R1 + 1/R2). Look at some of the lovely stacked / joined messes that lead to: 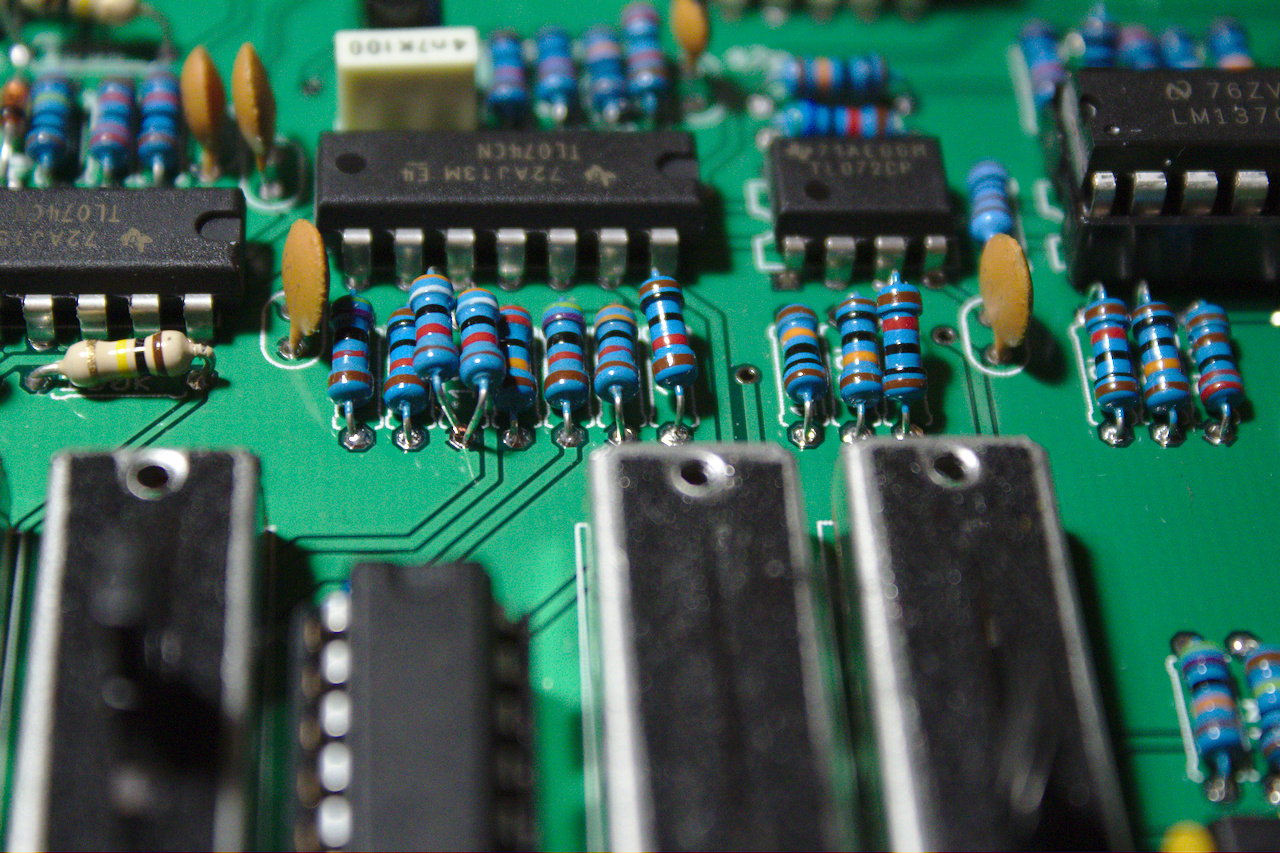 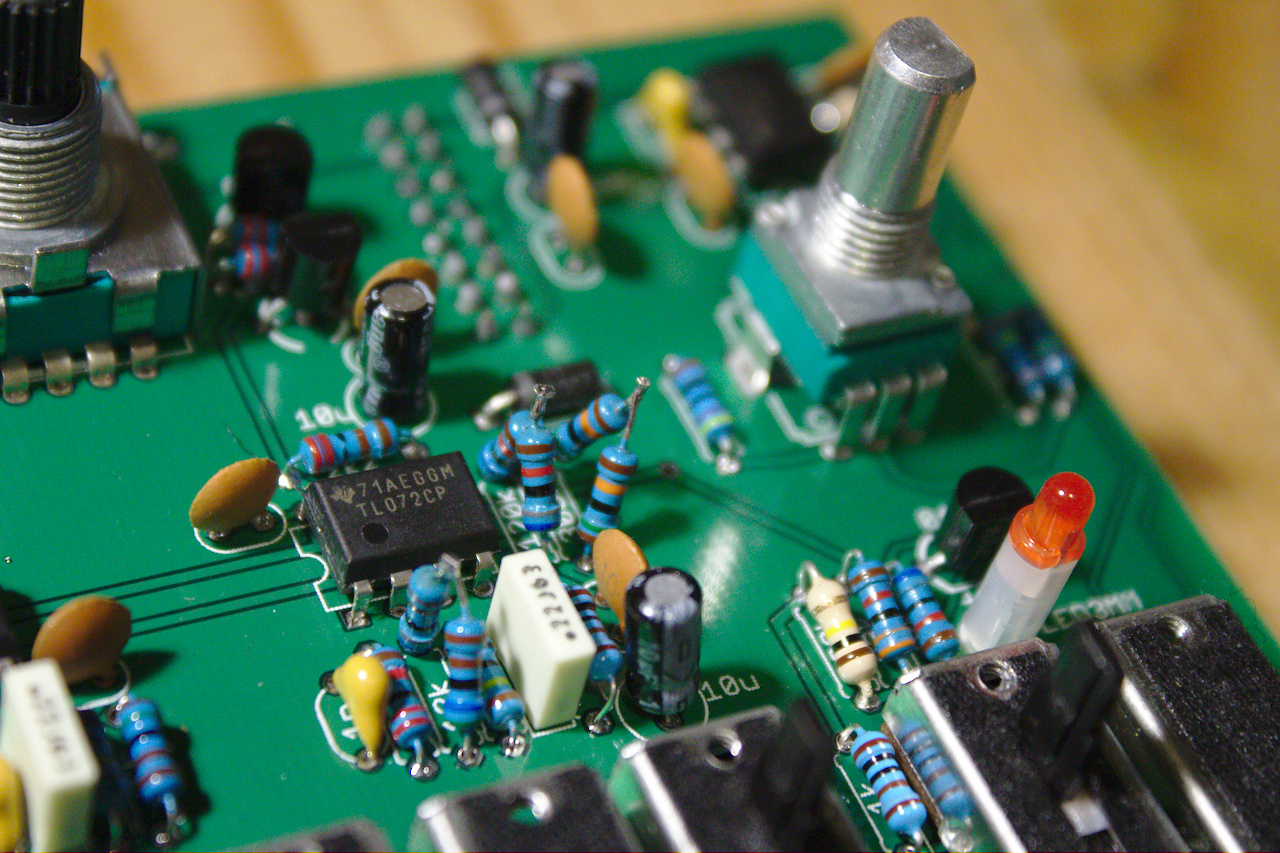