(Actually, it’s closer to two days: one to find out it existed and to mine some and one, much better, day to spent a few thousand of them). 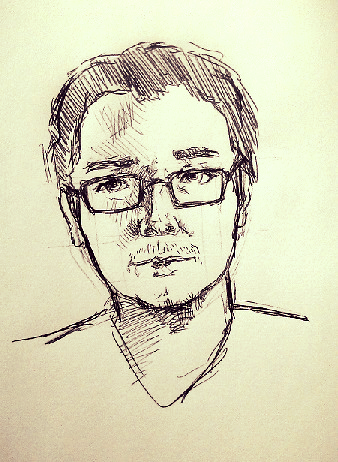 That’s a portrait that a Redditor drew for me. They wanted 1000 Dogecoins, I sent them 500 as a down payment (they were going to work on spec: not even people screwing around on the Internet should have to do that) and 1000 when they were done. It took them 15 minutes to draw and another 15 minutes to edit. 1500 Doge is about £1.50.

The community that has sprung up over night around Dogecoin is amazing. In a world where Bitcoin traders take their investments as seriously as City bankers do, and people are losing their life savings (or buying apartments for a $27 initial investment) Dogecoin is a breath of fresh air.

The coin is ridiculously easy to mine compared to even Litecoin, the silver to Bitcoin’s gold. Like Litecoin, it’s based on the more memory intensive scrypt algorithm, so dedicated mining hardware isn’t (yet) able to ruin the playing field for the dabbler.

Because the coin is easy to mine, and it’s worth so little, people can have fun passing it around. Very many transactions take the form of tips: people rewarding each other for “good Internetting” on places like Reddit.

I gave out 300 (which is about 30p, remember) in tips over the day. Some people tip considerable amounts, because they get the joke: sure, as of right now there’s a nominal 1000 Doge = $1 relationship, but that’s only while the community that’s actively trading still finds this whole thing funny and entertaining. This is over a dollar tip for a prank on the /r/dogecoin subreddit.

Which isn’t to say that the value is fake. To test this, I created a real eBay listing for 6,000 Dogecoins – it had 7 views over about 4 hours and then it was bought, for real Sterling, by a man in Scotland.

I have £4.50 in my account because someone decided that a meme-based crypto currency was a good idea.

While there’s lots of boosterism around Dogecoin by fans (like this GIF, showing how Dogecoin is intensifying), people are spending their coins, not hoarding them.

People are also, mainly, not dicks. Someone was asking 100 Dogecoins for a game I wanted: so I sent it to him. I said I was happy to send the money first and he could send the game over Steam. Or not. Whatever. His reply? “such trust, will pm!”

How to spend 8900 Dogecoins

I had a windfall of a bit over 9,000 coins, based on my shares from a mining pool I was submitting work to. Almost all of that is gone (though I’ve picked up more coins over the day as I’ve helped to solve more blocks).

While it’s still hip and cool, it’s worth picking up a few coins (or mining them, you’re likely to get some out of even moderate hardware) and browsing the permanent sell list (unique picture of Bluetiger811‘s cats? 100 Doge. A poem? 1000 Doge) and the DogeMarket new section for something cool.