I’m still umming and ahhing over whether to get a new camera, or whether I’d rather make do with my film cameras (both of which I love) and my camera phone (which I carry everywhere and has surprisingly good quality). As a camera, the K850i is really only lacking two things for me; a tripod mount and manual controls.

I can’t do much about the controls, but I can do something about the lack of mount. What I originally had in mind was a quite slim vice-like idea, going around the body of the camera (like a cradle it sat in).

Unfortunately, if you still want access to the buttons and the display on the rear, and you need the autofocus, flash and lens unobstructed, about the only option is actually to grip it at the sides.

Rummaging through the pile in the workshop, I found the best part of an Ikea step-stool, complete with those barrel-nuts that anyone who’s assembled much Swedish flat-pack will be familiar with. Again, the idea has changed a little, because I reckoned if I cut it to size, I could make the phone fit inside, leaving a gap for fingers to operate the camera, and then tighten one end to make it ‘grip’.

I’ll admit it, I messed up a little, and cut the wrong end of one piece. As I wasn’t bothered enough to do it over, I could see how the design could still work, albeit being a little trickier to fit together, and with more of a gap, and less of a tight fit. To make up the gap, and have the fit be snug, I needed something that would grip and would also give a little. In the past I’ve used cut up bicycle tubes, and I wanted to this time, but I appear to have misplaced my stock, so I used some pipe lagging instead.

Finally, I drilled a hole slightly smaller than the M6 nut that I used, and hammered that in place for a tight grip. M6 is not quite correct for a camera tripod mount, so I’m using washers to fill the gap between where the tripod screw fits and the rubber part of the original tripod.

The finished product, below, is far less refined than the one in my head, and I don’t see myself using it too often, but it does technically fill the brief, took less than an hour, and was quite fun to build. 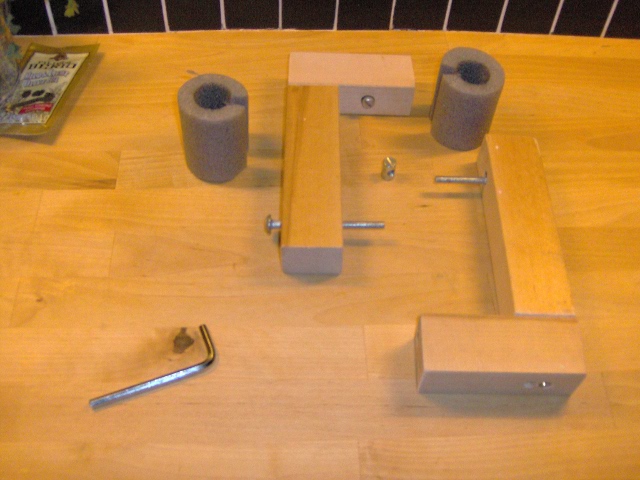