I’ve wanted a little Z80 microcomputer of my own for ages. I never learned to get the most out of a Z80 when it was appropriate (like, when I had a Spectrum +2) and it seemed simple enough to build on my own. There’s a smattering of other Z80 self-builds on the Internet and a fantastic free book about the process.

I chose the Z80 because:

Not Even Hello World

I ordered a Z80 (6MHz DIP40 version, though it’s never going that fast — Z84C0006PEG) and a 1MHz oscillator (not just a crystal!). I had 8K of flash ROM and 64K of static RAM left over from an earlier project. I got a set of three breadboards to build everything on, an Arduino Mega clone to program it, a little breadboard PSU and a PIO (because it was cheap).

The first step was to get a ‘free running’ circuit working. I followed what Stian Soreng did and pulled the data and address busses down to ground, and NMI/INT/HALT/WAIT and RESET up to 5V. I put an LED (uh, segment) on A11 so that I could see the light flash around every 2048 instructions. 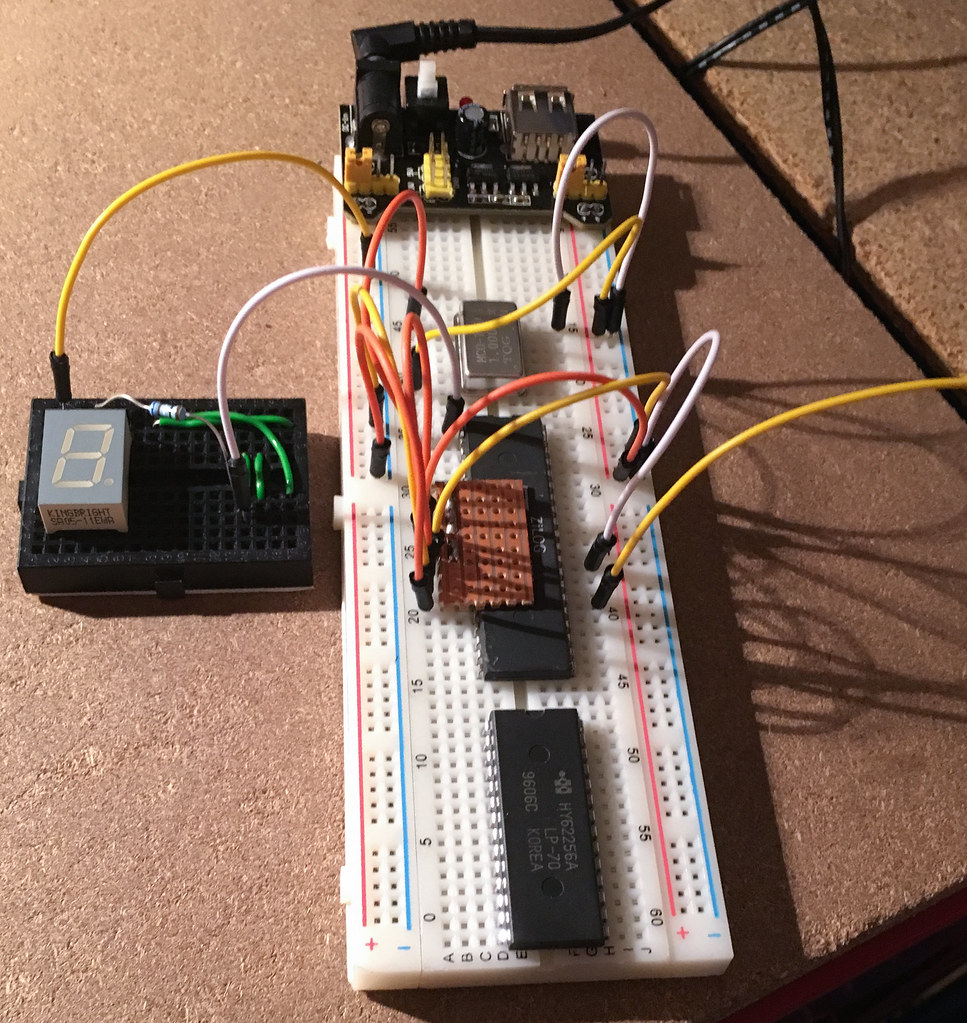 I ended up using a 7493 to divide the clock by 8 so I could slow things down and monitor things with LEDs. This means my Z80 is running at 125KHz. 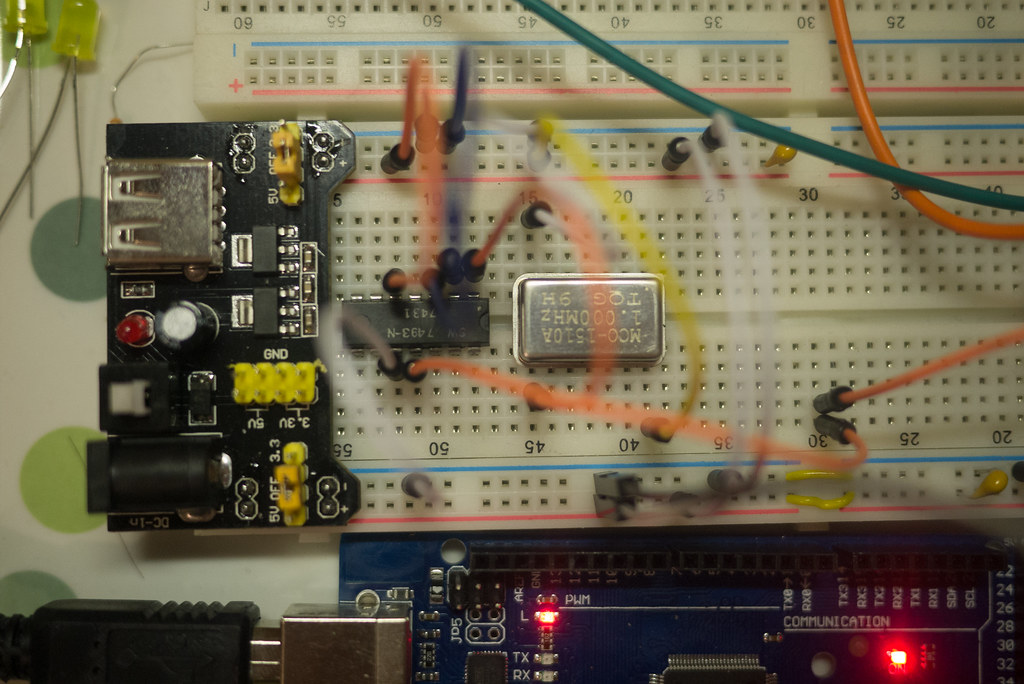 I’m thrilled to say that this worked first time: I’d never used this part and the part itself was highly suspect, but you can see the original and the divided signal on the A and B channels of our oscilloscope: 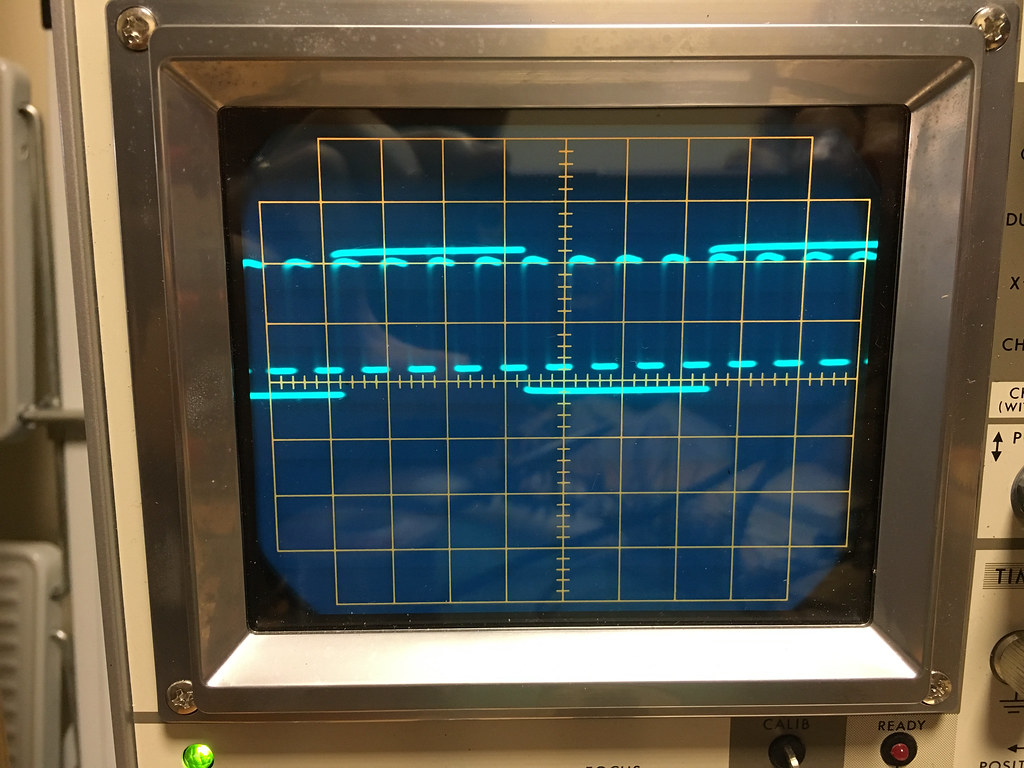 Blinking a light is the Hello World of hardware, but I’d gotten a logic analyser for Christmas (specifically for this project, really). It has 8 inputs, which is more limiting than I originally expected, so I hooked up the lower seven pins to the address bus and a pin to /RD, with a trigger set.

It looks beautiful at this point: 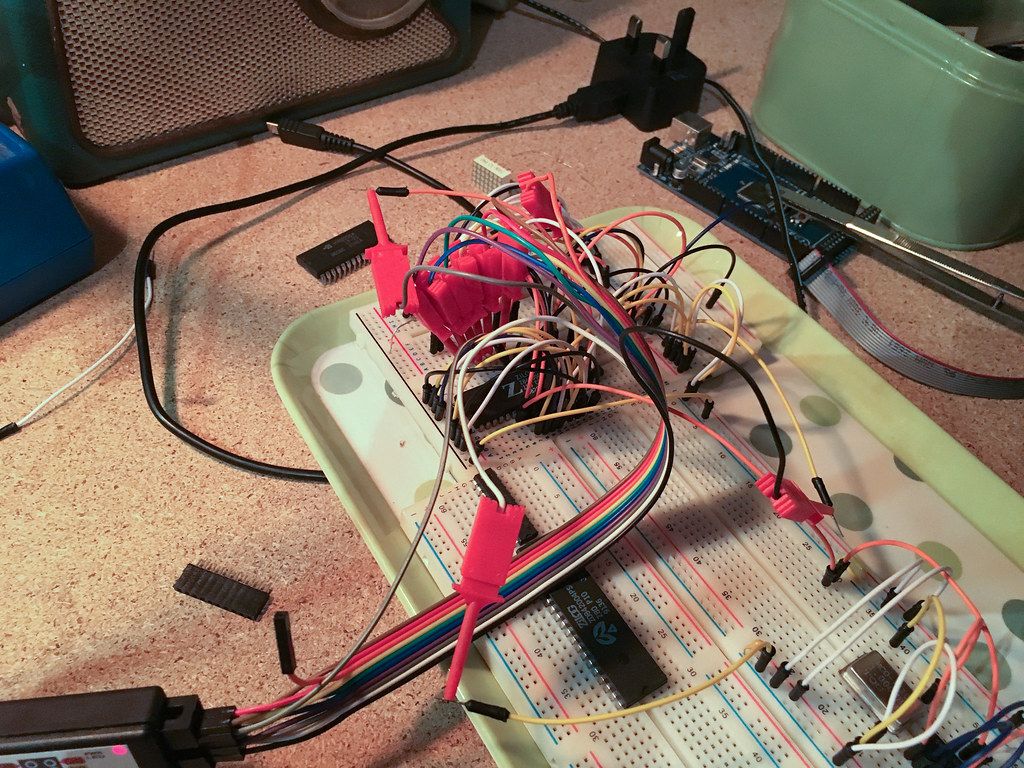 But at least you can see it counting! I’m going to consider this as a program which is all NOP instructions is just another way for saying “incrementing PC”. 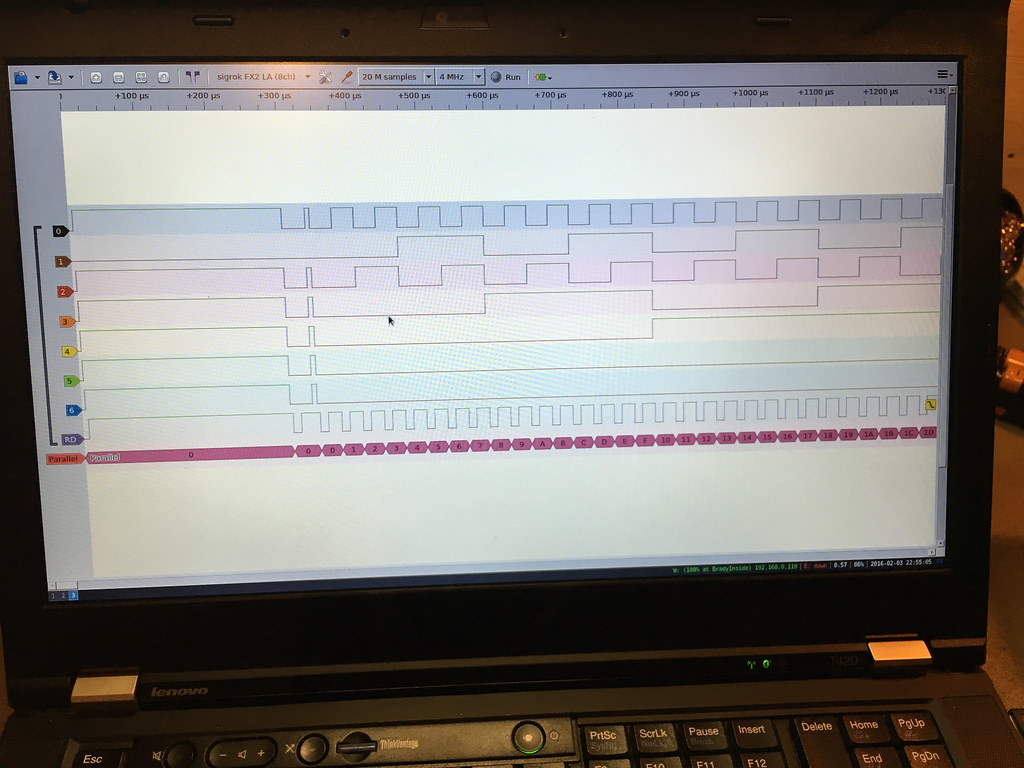 Well, now that we can definitely execute NOPs, it would be great to execute even a small program. It turns out that this simple step requires a pretty considerable amount of work. There’s a hint in the last update’s pictures, where you can see my Arduino Mega (clone) in the background.

The idea was always to get the Arduino to poke some data into the RAM and then start the processor. In the early stages that can mean I avoid programming flash ROMs, which is a whole extra level of messing around I’d love to short circuit. This adds many wires. 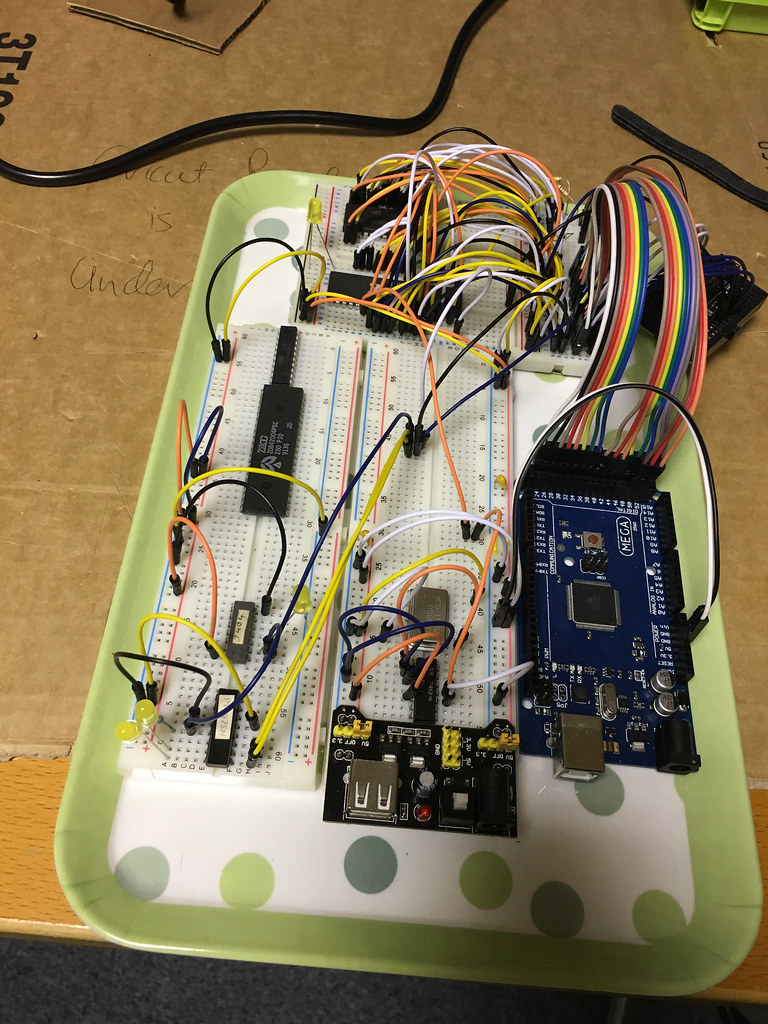 I’m breaking with chronology here: I wrote the RAM programmer before the Z80’s arrived, so I could be reasonably sure that this approach would work. The earliest version just wrote a values to matching RAM locations and read it back out again - you can see that here.

I’ll deal with poke in a later update, but this program, and the example program encoded in ram[] lets me zero the RAM, load in the program, bring the RESET line high on the processor, wait a second, bring RESET low, and dump the RAM out.

Here’s the RAM after a triumphant run:

That’s the program itself.

There’s some data I wrote to IO 0x55. A little hiccup: because I haven’t done any address decoding on this board yet, OUT instructions actually write RAM.

And here’s a simple “write A to the memory location A” style effect: 0x64 contains an 0x64 and so on.

The program was written in C, here’s the full listing. I’ll switch to assembly for the next few programs, because it’s easier for me to verify my programs and learn about the different addressing modes that the processor supports in assembly.

The equivalent to the above C program is this short commented Assembly listing. My first draft of address decoding hadn’t worked, so I wanted to go back and check that even the /IO pin was being toggled in the way that I expected.

I’d already found that hooking up my logic analyser was leading to weird results, so I opted to try my little single-channel kit oscilloscope: 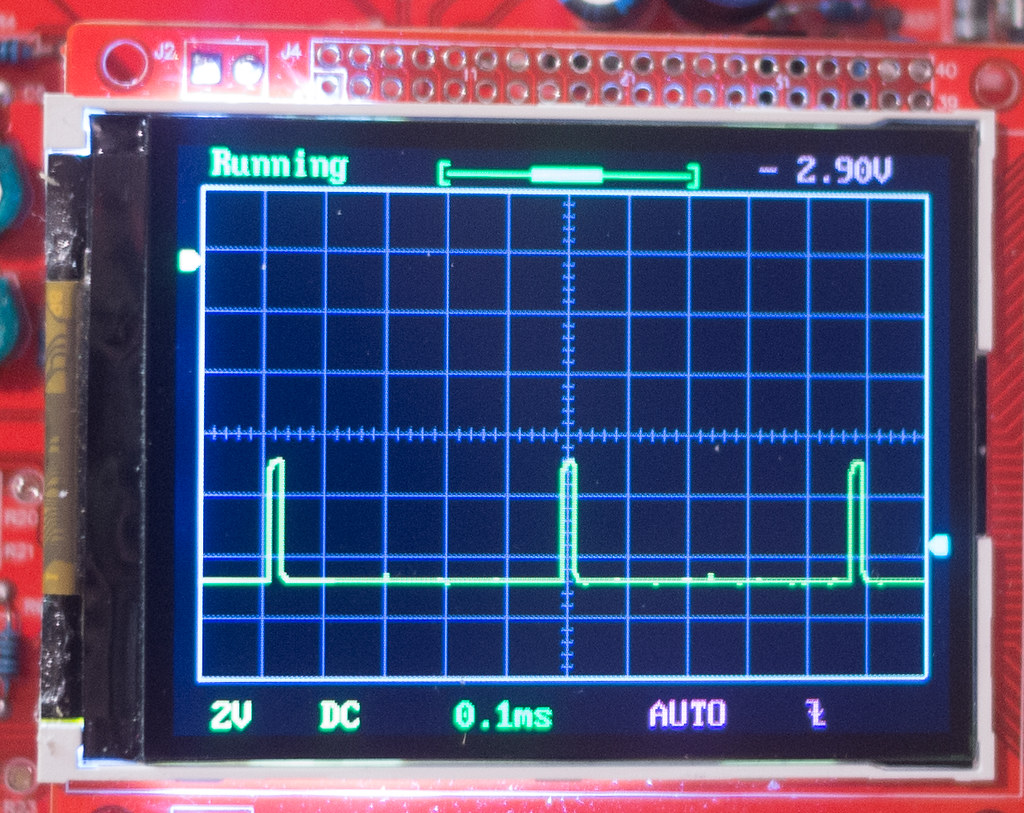 This listing with two IOs, one after another should show me how fast I can toggle the line, without any extra accesses or comparisons: 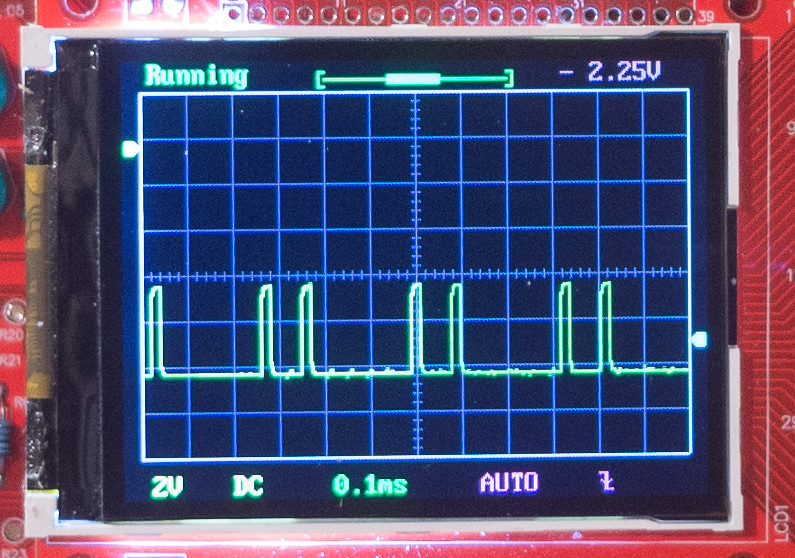 It’s clearly not great to have IO operations also twiddle bits of RAM.

About the simplest decoding I can do is to join the /CE pin of the RAM to the /MREQ line of the processor, but even with this done I wasn’t getting the results I expected.

Most of this was a software fix. I’ve changed the /OE, /WE and /CE lines to use the internal pull-up resistors (so I’ve removed the 1K’s I put on the breadboard) and most importantly I’m de-asserting /CE with every call to disownBus - holding it low the whole time was the source of my problems.

Now that is done,

has become the much better

after the program has executed.

To do anything remotely useful with this computer I’m going to need some IO. A UART would be ideal, but first things first, just some LEDs I can control from the Z80 would do.

I’m going to skip past the abortive attempts that didn’t work, using a 7475 Quad Latch. What I do have working is a circuit with a 7404 and a 74HC374 Octal Flip-Flop. I’m going to refer to this as a ‘register’ - that may not be 100% correct, but you can only type flip-flop so many times before it becomes silly.

I’m cheating with my address decoding again: as this is the only IO on the breadboard, I’m not actually decoding the address lines at all, I’m just triggering the register based on the /IO signal. I don’t even decode /WR or /RD - so either IO operation would store the contents of the data bus.

Sidebar: I wasted a lot of time before finding out that one of the inverters in the 7404 is broken. Test your assumptions!

I hooked up the logic analyser to D0, D1, the divided down system clock, /IO and the IO output from the 7404. The /IO is labelled as IO in the picture, and the IO signal as _IO. Sorry!

This is a successful capture of part of my new blinking lights program executing. You can see _IO rise periodically - when it does, the contents of D0 and D1 are copied to the Q0 and Q1 pins of the 74HC374. These are connected via LEDs to a resistor and then ground. 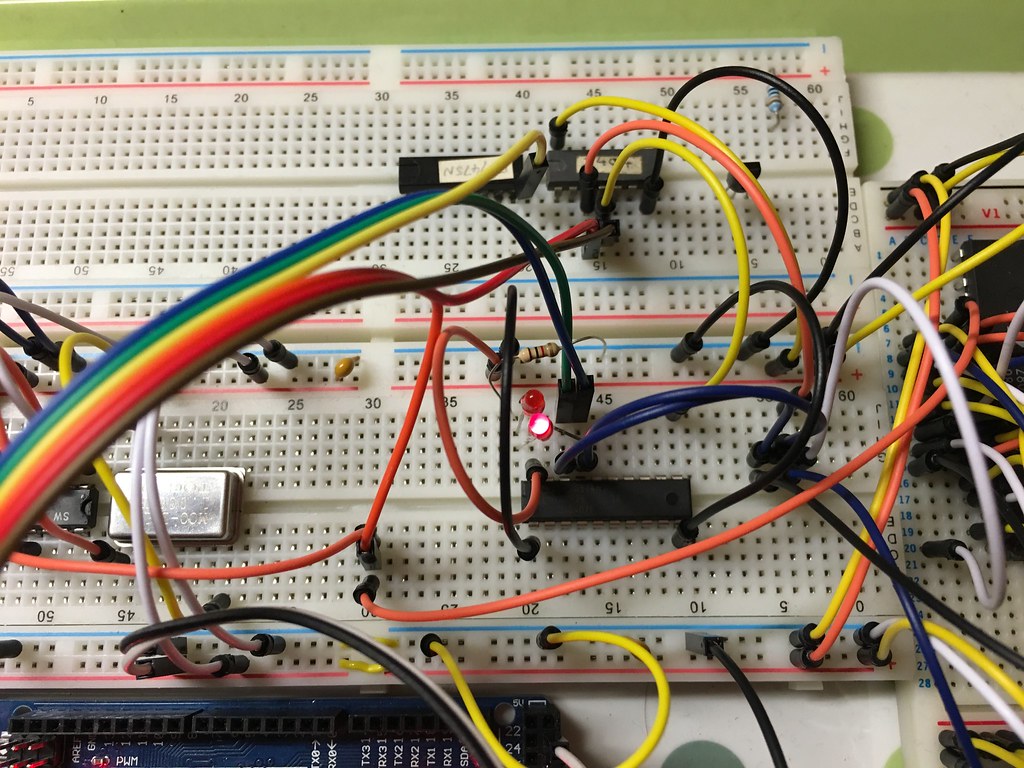 This is the current state of the IO section of the board. The 7404 is up top, next to the unconnected 7475, with the 74HC374 in the middle. The LEDs are clearly visible, and the rainbow wires leading off to the logic analyser.

I’m going to need some more gates to do sensible decoding, but this is basically enough to do bit-banged SPI. Milestone!