Isn’t it frustrating when you’ve got a new toy and you want to use it but you’re missing the one piece that you need?

I ordered an STM32F103 board on eBay at the start of April. After six weeks I assumed it went missing so I ordered another one, which arrived a couple of days later. Then the original one arrived. Typical, eh?

I bought these so I could follow along with the JeeLabs Dive into Forth and because the Cortex ARMs seem ridiculously powerful compared to the ATmega chips that I’ve been using so far.

The first one arrived and all of the 5V serial leads we collectively had for the office (one FTDI cable and a BusPirate) were back at people’s homes. I even looked to see if we had a spare Arduino Uno — one neat trick is that you can pry the ATmega out of an Uno and then use digital pins 0 and 1 hooked up to another device to re-use the Arduino’s serial bridge. (Also works for at least Diecimila and Duemilanove).

Nope. All the Arduino-and-clones we had spare were the kind you program with an FTDI lead.

The next day Bas brought in the FTDI lead and I got the first board bootstrapped with Forth, but then my second board arrived and he suggested getting the two to speak would be a nice ‘learning Forth’ project. This was going to mean more cables.

Clearly two cables between four people and a half-dozen semi-finished projects wasn’t tenable, so I bought a couple more leads on eBay from “UK sellers”. My experience in the past has been the cheapest UK sellers are … not in the UK. Often, my package ends up arriving a couple of weeks later with a CN22 form stuck to the outside. This is fine, it’s the cost of buying the cheapest parts.

I didn’t want to wait, so I had a look around what we had on hand. We did have a spare RS232 to USB adaptor. This one speaks the full ±15V, and I briefly considered using one of the spare MILSPEC SP232’s we got cheap to bring it down to TTL, but that seemed mad: there was going to be a MAX232 or similar in the serial adaptor bringing it up to voltage so it could go a couple of centimetres before getting stepped down again.

We popped open the case, and there were two main ICs, a Prolific 2303 (the USB to Serial IC) and a ADM3251E (the RS232 line level convertor). I tried to desolder this with no success, but Bas stepped in, cut the leads with a craft knife and ran the iron over the chip’s leads and it basically fell off. He also did the very fine soldering to pins 1 and 5 of the Prolific chip, TX and RX respectively. 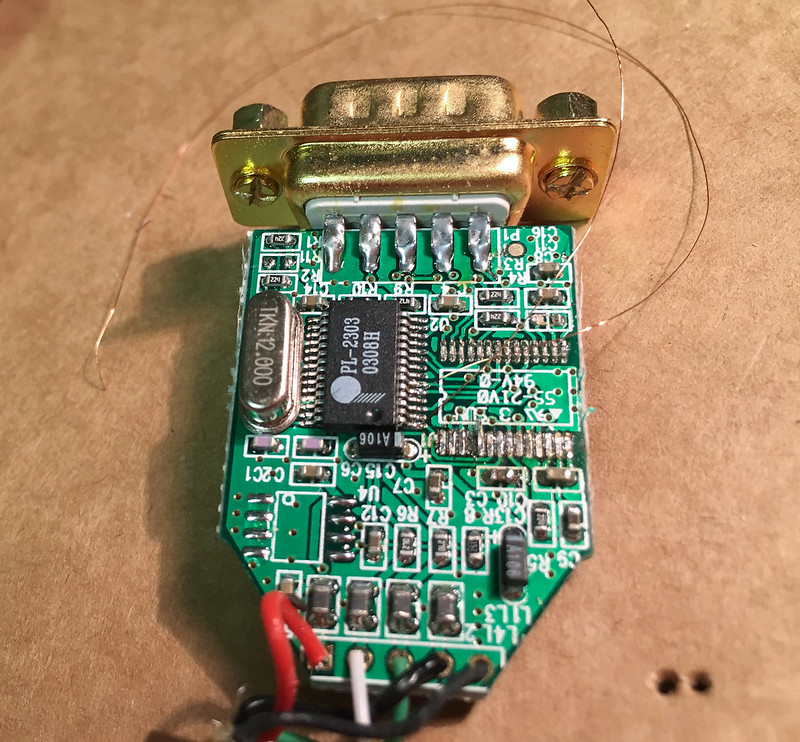 This was pretty fragile, but a quick test of connecting the two whiskers with a crocodile clip and typing into a serial terminal confirmed the connections were good (we got the characters we typed echoed back).

The most convenient connector for our purposes was going to be female DuPont wires, so I cut down some female-to-male wires with a vague colour code of: 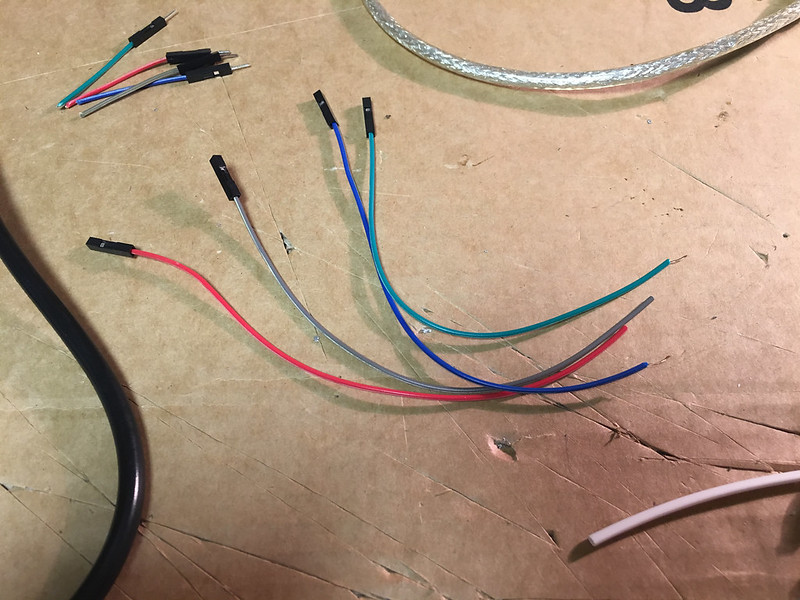 Clearly those very fine wires were going to be mechanically weak, so I borrowed my wife’s glue gun to hold everything in place, and soldered the much larger DuPont wires to the trimmed magnet wire. 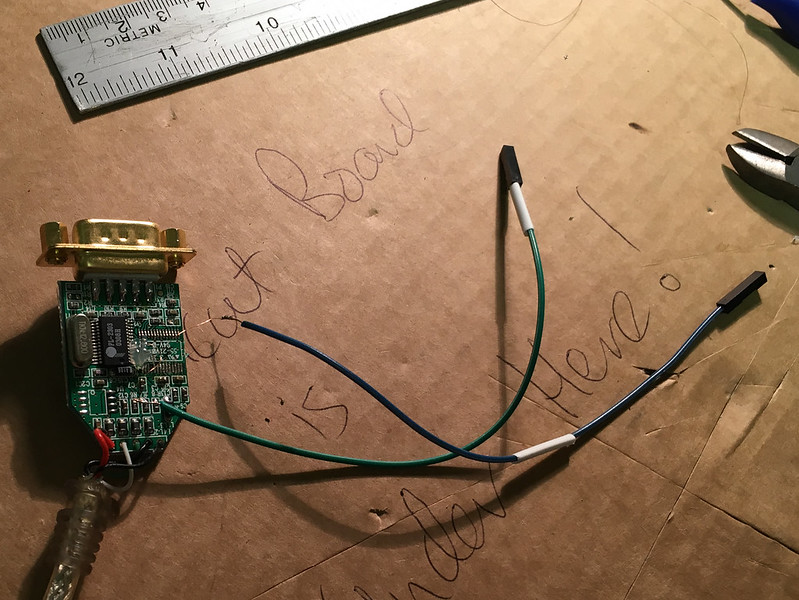 Time for a quick test with the microcontroller (power is supplied separately at this point): 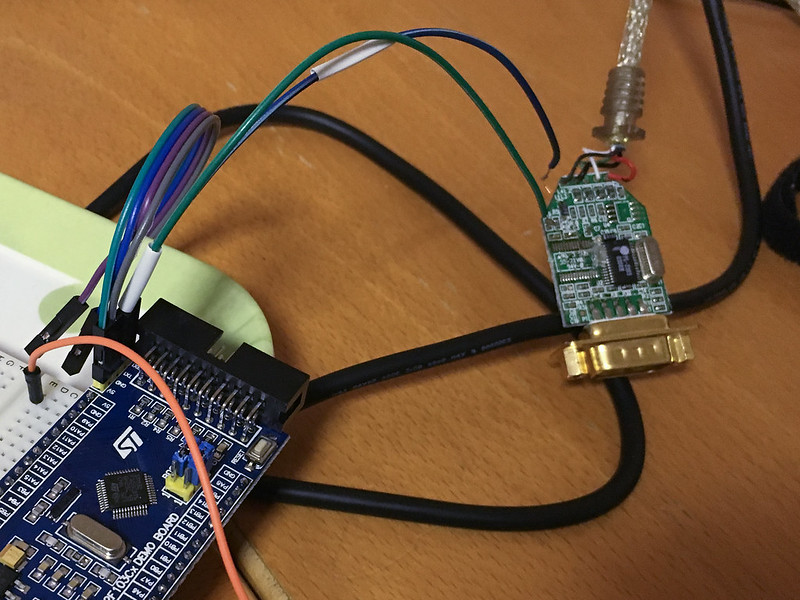 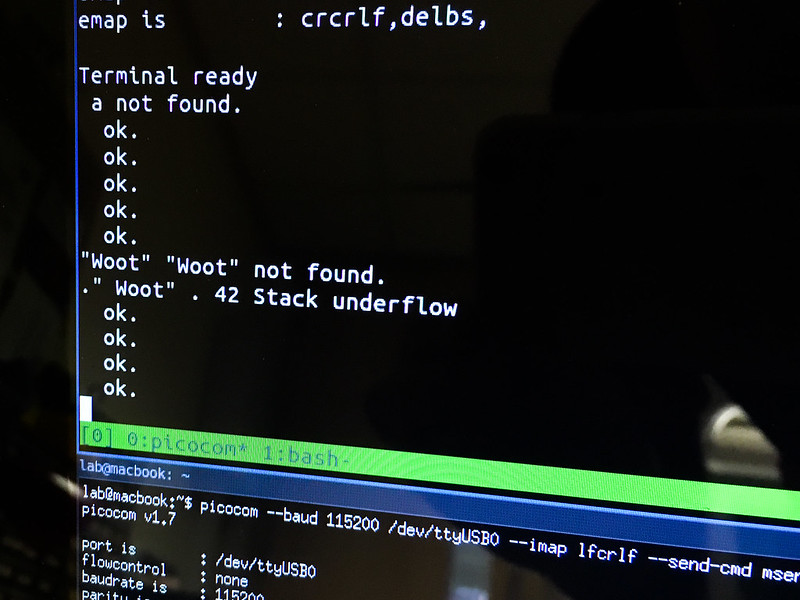 I drilled a hole in the original case large enough to admit the leads and wired up the 5V and GND. I pressed everything down and liberally covered it all in hot glue (not pictured: the photo didn’t come out properly). 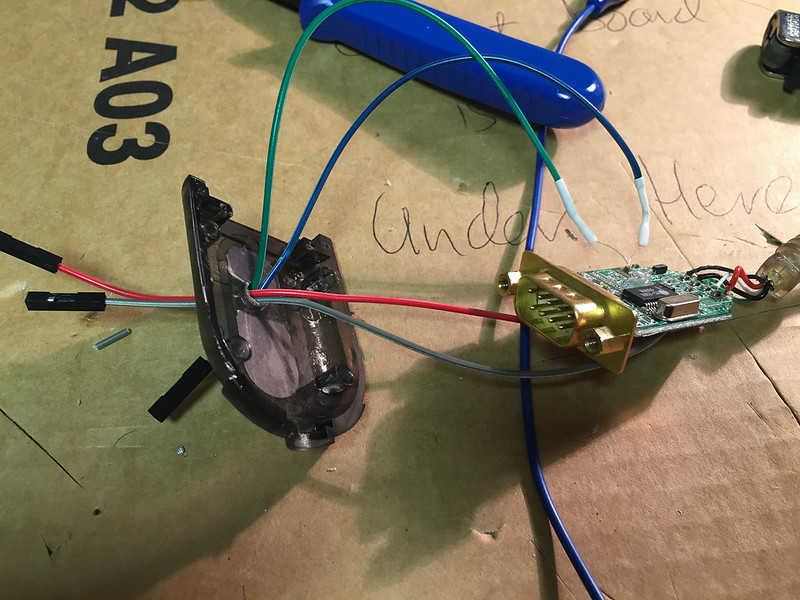 The original case even fits back on more or less snugly. 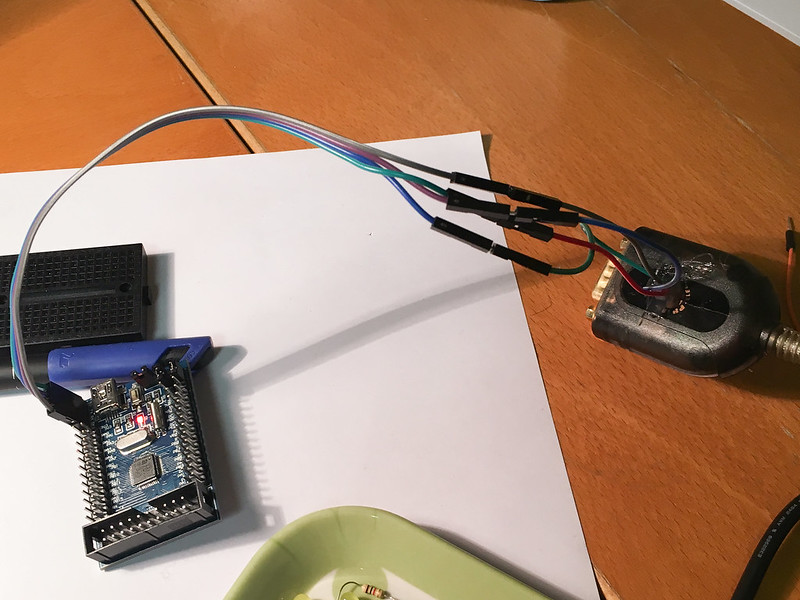 Now I could talk to both microcontrollers at the same time, and get to work activating their second USARTs to get them speaking to each other.

(Oh, and the cables I ordered actually were in the UK, and they arrived the next day. Still, there’s no harm in spending a lunch time hacking something you need from what you have to hand, right?)