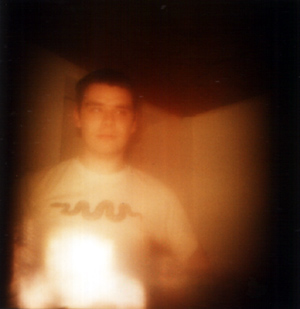 Pictured: Me, channeling energy into a dangerous fireball with which to lay waste to my foes.

That said, as much as this ability would shift the balance of power in contract negotiations, I can’t actually do this, yet.

This effect was achieved through old-school camera trickery of the film variety. It’s customary for photographers to list their equipment with a photograph, and it usually consists of something impressive like “Canon EOS 300 with 50:1.8 Prime Lens on Fuji Velvia ASA100”.

Being that I cannot afford, and would not likely use, such expensive equipment, this is my list of items used:

I would advise everyone to get a Polaroid camera. You can get an i-Zone one in Toys’R’Us for under £10. I got my Polaroid 1200 for £9, but the film cartridges are like hen’s teeth to find. Expect to pay around £1 per picture, making it a slightly expensive hobby.

It gives you instant gratification and, more importantly, it might save your soul from digital.